NJFX: The Marseille of the US 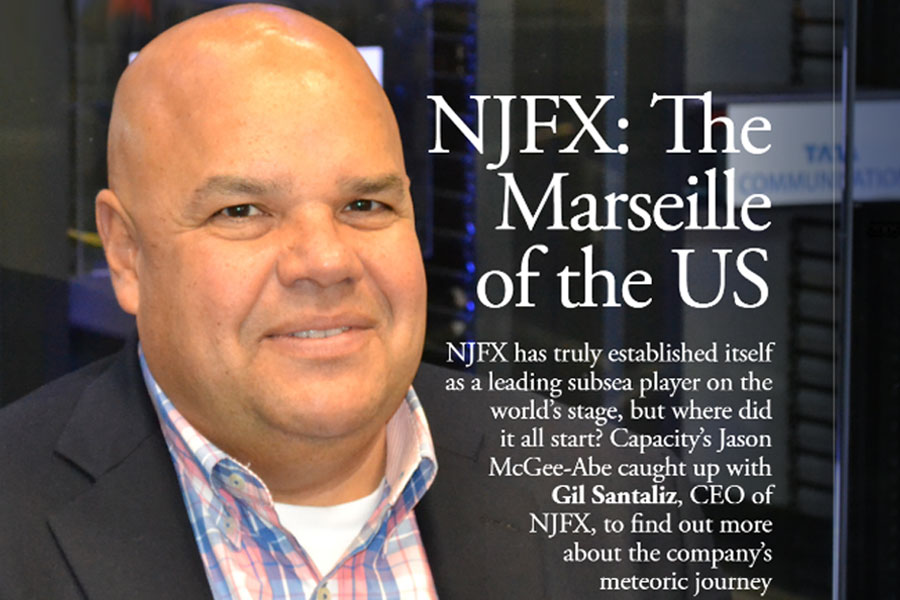 As I make my way up to interview Santaliz, I think about how far New Jersey Fiber Exchange (NJFX) has come in becoming a household name in such a sport space of time.

Before walking into the NJFX meeting room at Capacity Europe I immediately notice the adjacent room. It’s hosting Interxion and two things spring to my mind. Firstly, about the news that broke the night before that Digital Realty was acquiring Interxion for $8.4 billion, the biggest data center deal in history, and the interesting conversations that must be happening inside. Secondly, the influence that the Interxion business model that originated in Marseille has had on NJFX’s evolution.

Where did it all begin?

The concept saw a joint venture formed and launched in 2015 with a group of investors, which included Tata Communications. “Originally, we were going to be a sidekick to Tata in that we were building a Tier III data centre next to their cable landing station (CLS),” says Santaliz. “We put the capital up for the land, construction, and then interconnected the facility with the cable landing station (CLS).” NJFX build a 1.4 acre plot next door to the Tata Communications subsea CLS, where it built a meet-me room (MMR). After a short while there were some management changes at Tata Communications and the relationship changed somewhat. “They are still a shareholder today but not to the same extent,” he adds.

“We had developed our relationship with Interxion at Capacity events and watched what they were doing in Marseille,” he explains. “I met with Dave Ruberg [CEO of Interxion] and even went to the WWII submarine repair facility in Marseille where he said that he was going to turn it into a big international CLS.” Santaliz admits that he thought Ruberg was out of his mind at the statement but has been amazed watching it all become a reality. Interxion has certainly helped to boost the city of Marseille, which now plays host to 14 subsea cables. This visionary idea struck Santaliz and, with the support of his partners, NJFX purchased another 48 acres next door back in Wall, New Jersey. “We got the right to put another data centre in, which was a 150,000 sq ft 15 MW facility with a separate CLS.”

“Subsea players approached us as a result of our independence and carrier-neutral approach, saying that they would bring the cable straight into our building,” the CEO adds. After the first cable was confirmed for the CLS, NJFX approached SubCom and a blossoming partnership is still ongoing.

From that moment, NJFX went from being the sidekick of a joint venture building a Tier III data centre to support Tata Communcations to becoming the host of its own subsea CLS and carrier-neutral site. Today, NJFX owns and operates a 58-acre campus. It has the ability to interconnect to multiple subsea and terrestrial cables from one place. Following Ruberg’s vision, Santaliz and his partners have created the Marseille of the US.

“We have two MMRs that are interconnected to each other, so we don’t discriminate,” Santaliz says. The carrier-neutral player’s philosophy is to help carriers grow their business and not get in the way it even commits to not even selling internet to its customers. “So we’ve created a true carrier-neutral product that the market wanted and really needed,” he adds. “We don’t sell anything other than space and power. We’re hosting subsea cables in a building in the US and there’s no other place in the US that does what we do.”

News circulated around the industry in October that NJFX now marks the spot of the first-ever dual CLS to terrestrial interconnection after partnering with Telxius and Windstream Wholesale.

The NJFX CLS in Wall, NJ, is now connected to Telxius facilities at the CLS in Virginia Beach, VA, which is connected to the MAREA and BRUSA subsea cables. Windstream supports the connection with over 500Tbps of transmission capacity, boostin global connectivity options.

“We are proud to be the catalyst of the first-ever CLS to CLS terrestrial route. This is an integral part of the shift the industry is seeing in new infrastructure being deployed to replace the old networking models,” proclaims Santaliz. No one ever really thought of using the east coast of the United States to get traffic up and down before but NJFX is helping this become a reality, he adds. Another system linked to this is Crosslake Fibre’s 95km unrepeatered subsea fibre-optic cable to Long Island.

“The total capacity of the subsea cables coming out of these two cable landing stations is greater than all of the capacity of the previously placed North American subsea cables stretching across the Atlantic Ocean combined.  Windstream and Telxius are bilaterally leveraging each company’s routes to address customer network diversity requirements and capacity needs. The potential for clients is endless.”

NJFX has sealed a number of partnerships over the past year, which has included the European-based carrier class Ethernet exchange NetIX, which connects over 20 IXPs that serve more than 100 members, enter the US market for the first time by launching a new PoP at the NJFX colocation campus.  The PoP at NJFX also provides opportunities for American peers to exchange traffic directly with other peers around the world. NetIX declared that it picked NJFX because of the array of subsea cable systems it has landing at its cable landing station.

Another level of NJFX’s evolution involves the establishment of new intercontinental wide area network (WAN) capabilities between North America, South America and Europe, which have been developed in partnership with Bulk Infrastructure and Neutrona Networks.

The highly anticipated Havfrue transatlantic subsea cable network lands into NJFX’s CLS campus. It runs between New Jersey and Denmark, with branches into Ireland and Norway. The consortium backing the new transatlantic cable includes Aqua Comms, Bulk Infrastructure, Facebook and Google.  The system is expected to be ready for service in Q4 2019.

The next wave of technological advancement will be just as compelling with the onset of the enterprise revolution, which takes the WAN model and extends it into other continents through NJFX’s unique CLS campus. Santaliz discloses that NJFX is now open to bespoke facilities on its campus. “We’re building out the campus and we’re going to announce that we’ll have a new cable station building available that someone can have for their own use,” Santaliz tells me. “If someone wants their own four walls, here’s a building that we can create, which is a 15MW data centre and you can do your own thing.”

With the industry constantly growing, we’re all trying to keep up with the explosion of data usage. NJFX has firmly established itself as an innovative on/off ramp to global networks and is in a unique position as one of the most critical meet-me points for access to international connectivity. It has started a revolution in the subsea industry with its carrier-neutral Tier 3 by the subsea model and bespoke agile approach. It’s clear to see why business is booming in New Jersey.

PrevPreviousTerra Firma: Why Terrestrial Connectivity Matters to the Cable Landing Station
NextThe Future of Subsea Connectivity lies in the CollaborationNext