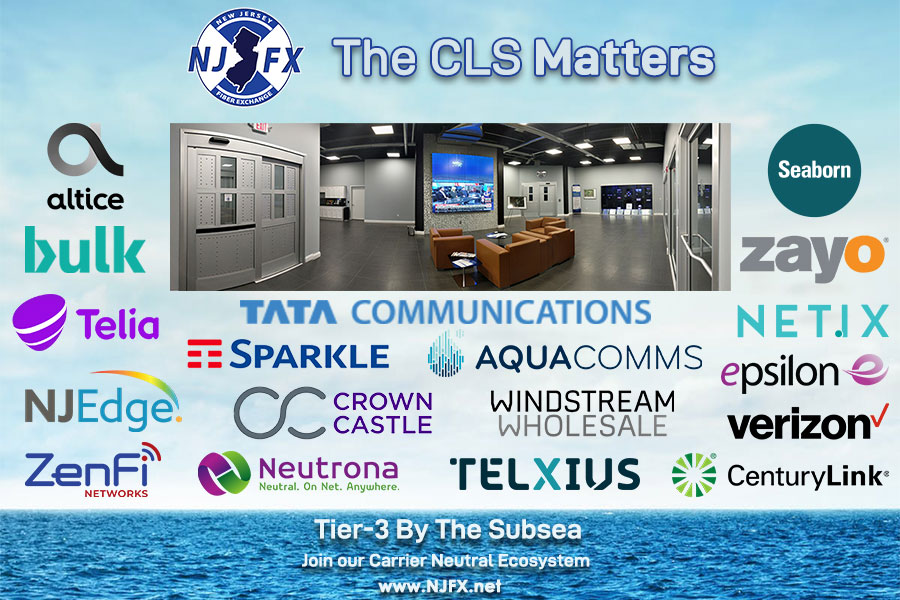 The Cable Landing Station (CLS) colocation is where the networks live today. As an example, consider the petabytes per second being transported across the Atlantic Ocean into the U.S from Europe and South America – physically coming in through subsea cables. This traffic needs a home and the CLS enables carriers to provide the diverse private ‘roads’ to carry that data. Carrier-neutral subsea capabilities empower customers with options when choosing which cables will transport their data to key landing points. When a colocation data center campus is physically located at the meeting point of multiple subsea cable landings linking three continents, international connectivity is just a single cross-connect away. The result is a high-resilience, low-latency network with direct interconnection options for service providers, enterprises, carrier-neutral operators and cable companies. Customers can further diversify and plan their international connections with clarity and accuracy, eliminating any transport uncertainty.

Moreover, when a number of subsea cables land directly at a CLS colocation campus, this enables enterprise, content, financials, media, government, and communications providers to have maximized redundancy, reduced latency and better quality connections with fewer international points of failure, fortifying the protection of their international data traffic. Meanwhile, network operators, by establishing a Point of Presence (PoP) at a CLS colocation campus, can design reliable architecture with diversity to other PoPs around the globe, once again with fewer points of failure and better service quality as well as lower operational costs.

As an example, NJFX serves as a Tier 3 Global Network Operations Center (G-NOC) on the U.S. east coast. Data traffic comes into NJFX through subsea cables and then is interconnected across the U.S. via terrestrial networks and ultimately to end-users. Consider NJFX as the North American distribution center for data dissemination into and across North America. The NJFX community of carriers make its CLS a marketplace rich with fiber networks and platforms – providing multiple options for routes, security and diversity.

“The increased connectivity from Crown Castle gives national enterprises and content providers an opportunity to use one of the largest, densest fiber networks in the country to securely and reliably transfer their mission-critical data.” – Jim Young, COO, Crown Castle

There are hundreds of thousands of miles of subsea cables traversing the globe with over 90% of the world’s international data transmitted across them. It is critical to global communications to eliminate unnecessary points of failure and shore up potential for security breaches.

“The new breed of cable landing station has become a critical infrastructure in facilitating reliable and secure interconnection. By having a PoP at NJFX’s CLS colocation campus, Epsilon is enabling service providers and enterprises to interconnect data centres, cloud services and internet exchanges on our network fabric across global economic hubs. The combination of software-defined networking platform and CLS delivers global connectivity at scale with greater performance and visibility.” – Jerzy Szlosarek, CEO, Epsilon

Make no mistake, the modern CLS colocation campus is indeed a very rare breed, and there are very few such facilities in the world. However, the direct connectivity that supports customer diversity requirements shouldn’t be limited to just multiple subsea cable access capability. Rather, it’s also the availability of access to multiple backhaul providers for direct and diverse connectivity to core markets — in the U.S., to Ashburn, Chicago, Dallas, North Carolina, Philadelphia, and other cities, thereby bypassing common points of network failure such as New York, Northern New Jersey, and Miami — which truly distinguishes the CLS colocation campus of the future.

This new model represents a paradigm shift from the traditional approach of providing fiber backhaul to the nearest metro area hub. In the modern CLS model, it’s the cable landing station campus that is the de facto hub, providing better access to connectivity, low latency and high capacity. Legacy carrier hotels that are located further inland on Long Island and in lower Manhattan aren’t capable of providing the infrastructure model that can provide interconnection to 300 terabits or more.

The carrier-neutral colocation hub at the subsea cable landing with diverse terrestrial connectivity options is the way of the future. Traditionally, it’s the role of the CLS to transition data transported by the subsea cable to a terrestrial network, which then provides connectivity to a major population center. Typically, the terrestrial system has two routes available to the hub, a redundancy of design to ensure uptime in the event that one route becomes compromised. Once data reaches the hub, it’s transported to various destinations across the North American continent, or beyond.

But to be a true CLS colocation hub, the availability of multiple terrestrial routes is as essential as multiple subsea cable system options, and here, there is a critical difference, even between currently operating CLS campuses.

“ZenFi Networks was one of the initial providers to connect to the NJFX CLS campus and we are pleased to offer carriers direct connectivity to over 40 key colocation POP’s throughout the NY and NJ metro region. Our purpose-built fiber route out of the campus offers diversity from other providers, and delivers latency-sensitive, secure backhaul options for carriers and their customers.” –Vincenzo Clemente, President and Chief Operating Officer, ZenFi Networks

It’s not conducive to uptime and performance if a high capacity cable system lands at a site only to be stranded with just one or two backhaul options, as is the case with some CLS campuses. On the contrary, it’s access to multiple backhaul routes that creates truly diverse options, which in turn fosters reliability, availability and security of data transport – a critical requirement for financial services, healthcare organizations and other enterprises, as well as carriers, content providers and government agencies, which depend upon maximum uptime.

For one out of three enterprises, a single hour of downtime can cost anywhere from $1 million to $5 million, according to a recent Gartner survey. In fact, network outages experienced by North American organizations alone result in revenue losses of $700 billion per year, so claims a report by IHS Inc. (NYSE: IHS).

But aside from the financial stakes, there are potential reputational repercussions when an organization’s network goes down: loss of customer trust and brand equity. A CLS colocation campus like NJFX that also operates a G-NOC offers many unique U.S. fiber backhaul solutions, avoiding traditional legacy network points of failure. This not only maximizes network redundancy and resiliency, but can also improve service quality, reduce expenses and help drive new revenue. As a G-NOC, it can also provide hands-on, operations and engineering support within quick turn-around timeframes, which offers a lot of value to providers who need specialized support.

As bandwidth demands continue to spike upward — the Cisco Visual Networking Index predicts that annual global IP traffic will reach 3.3 ZB per year by 2021, a three-fold increase from two years ago — new subsea cables and expansions of existing networks will become necessary, and not just linking major global hubs but second tier, emerging and underserved markets as well. Subsea cables are the information superhighways of the global economy. But once that data reaches shore, it has to arrive on terra firma — solid ground — at a physically secure and hardened CLS colocation campus, with multiple backhaul options, to ensure that data safely make its way to its ultimate terrestrial destination.

“Windstream wholesale continues to strategically invest and partner with CLS and data centers in order to extend its expansive long-haul network to the ultra-high capacity subsea operators. Our domestic and international customers need providers that are flexible and offer networks capable of growing ahead of them, not just with them. We’ve established a reputation for being that provider that offers diversity and customized routes through our uniquely dense domestic US network.” – Joe Scattareggia, EVP, Windstream Wholesale

The CLS hub of tomorrow will not only offer access to subsea cable systems, but also provide the terrestrial backhaul needed to get beyond the landing point and out into the hands of the companies delivering the data, provide faster on-ramps to cloud infrastructure and power communications more reliably. Now that’s solid ground.

About: NJFX offers access to four subsea cable systems to Europe and South America, and seven independent U.S. fiber-based backhaul providers. Customers can also access PoPs in 15 countries across Central and South America, Mexico, and the Caribbean. All of these subsea and terrestrial network options are uniquely available in a carrier-neutral setting that is strategically-positioned 64 feet above sea level in a Tier III, secure facility on the Jersey Shore.