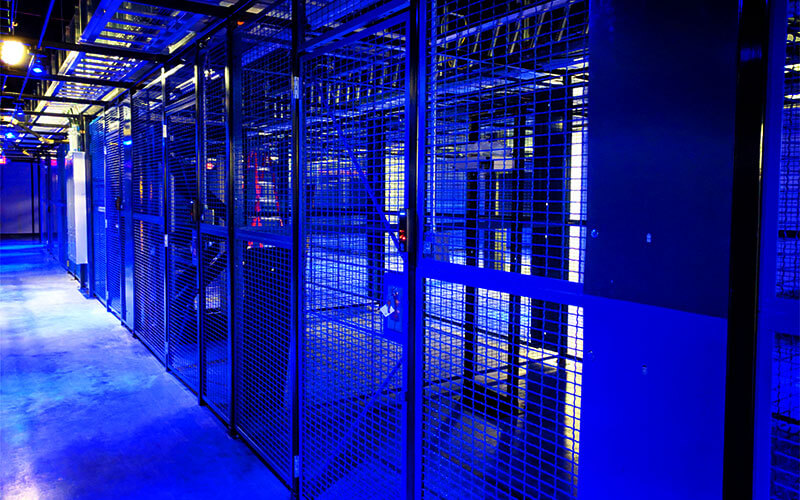 Since the first cable landing station began operating almost 150 years ago, they have grown to become a vital element of the digital infrastructure that drives much of the industrial and social communications. According to the last data available from Submarine Cable Map, there are about 400 submarine cables around the world, that is a volume of more than 1.2 million km of submarine cables. These submarine fiber-optic cables are irreplaceable: they are more efficient than satellite connections, as it is estimated that a cable has a transferring capacity of almost three thousand satellites.

One company heavily involved in this business is New Jersey Fiber Exchange (NJFX). A big difference in what NJFX can offer is that they are carrier-neutral, meaning they do not own and operate the cable. Instead, they support the system’s operators, independent of the economic relationship, and help them manage the capacity and equipment to make sure it is always running.

The New Jersey facility that the company uses is impressive. Even though it appears to be one building, it is considered two buildings internally by code so that the generator room can support nine MWs of power. There is the support space for all the electricity coming into the building, the main distribution rooms, power distribution rooms, and DC plants. Then there is something called whitespace, which is essentially what is usable in the building. The company’s whitespace is designed for 1100 rack equivalents and 4.4 MW worth of IT. There is also a rise of enterprise customers coming from US banks and hospitals who are now tenants in the building because they want to be as close to those cables as possible and access the providers that come to the stations. “Verizon is a customer of ours, and they are there to pick up their international capacity and send it back and forth,” Gil Santaliz, CEO of NJFX, says. “My customers would work with Verizon in the building to get access to their core network nodes, and that’s where the action is in Telecom because that is how you connect countries.”

The power that it takes to run the cables can vary depending on the cable’s distance. For a transatlantic system, the power feed will usually be between 50-60 KW, depending on how many paths of fibre there are. The way these cables are designed, they can power from either side of the ocean. There is no boost station required, the cables have repeaters on them which boost the signal across the ocean.

The company places a lot of emphasis on security in terms of access to those cables, this is due to the global economy’s financial implications for their operation and their privacy. The cable landing station that the company uses has many security provisions such as mantrap access controls, ballistic three lobbies and an advanced ticketing system for visitors who are coming to the building. Making sure that the security works has become as important as the security itself, as companies want to make sure that no one can get anywhere close to accessing vital fibres.

“On our campus, we have four subsea cables,” Santaliz continues. “This includes the original Tata TGN one and two that connect the UK to the US, the C Bras cable, which Telecom owns, and most recently, the half route cable that went live, this goes from NJFX in New Jersey to Denmark, Ireland and Norway.”

For landing station operators, there are some big challenges. While security may be a major issue, ensuring the correct maintenance of power and cooling is vital. If they cannot be properly maintained, the equipment will not work, and the cable will fail. “We provide Smart Hands, which is technical expertise on how to support cables, DW/DM or SLT equipment,” Santaliz continues. “We have a highly technical team that can support operating the subsea cables, which has been especially important during COVID because of restricted travel. Our team did a lot of the work where traditionally, they might have hired the third party to come and do it.”

The company was chosen by Bulk Infrastructure as the US on-ramp location for the Nordic Gateway, an on-ramp solution accessing fibre networks that unlocks the sustainable Nordic region’s natural resources which stretches 7,200 kilometres from New Jersey to Denmark and Norway. “We recognise NJFX as a model for an evolved cable landing station, with both direct access to subsea systems and data centre capabilities at the landing point,” Peder Naerboe, owner and chairman of Bulk Infrastructure AS,” Santaliz continues. “We believe The Nordic Gateway unlocks one of the few genuinely sustainable solutions in the data centre industry today. With this solution, the industry can utilise 100 per cent pure emissions-free hydropower from the Nordic countries.”

The COVID-19 pandemic has also presented great difficulty for NJFX. Despite travel being highly restricted, having technicians work from home was not an option. The company worked alongside the local government to make sure that the vaccination of employees was prioritised. They also went through a protocol process to keep people separate in the facility and enforced a do not touch policy with cards indoors. “We did pretty well because we could help our customers, and we never took a hiccup in terms of staffing the facility,” Santaliz says. “The other one was, post the capital event, there were lots of threats on New York City once again, and the fact that we have a fenced-in perimeter, and in a rural area, gives us much better protection for those unfortunate man-made threats that are still out there.”

Despite these difficulties, the market for cables is expected to continue growing over the next few years, especially with the rapid spread of 5g. “There are two main parts of cables, the arteries and the capillarity,” Santaliz explains. “The arteries are the subsea networks, and the capillarity is what we are starting to see now with the proliferation of 5g. That capillarity will grow the artery requirement, and the more touchpoints we have between countries will make those arteries larger.”

This growth can be best exemplified by the increase of projects in countries that were never included before. “Africa has got an incredible boom going on right now when it comes to the number of connectivity projects in Africa,” Santaliz concludes. “South America is getting lots of projects that they never had before, the total number of cables between the US and Brazil five years ago was less than six cables, and there will be at least 12 in the next two years. Each cable has ten times more capacity than the ones before, so they are going to start retiring the older cables because they are just not economically viable.”