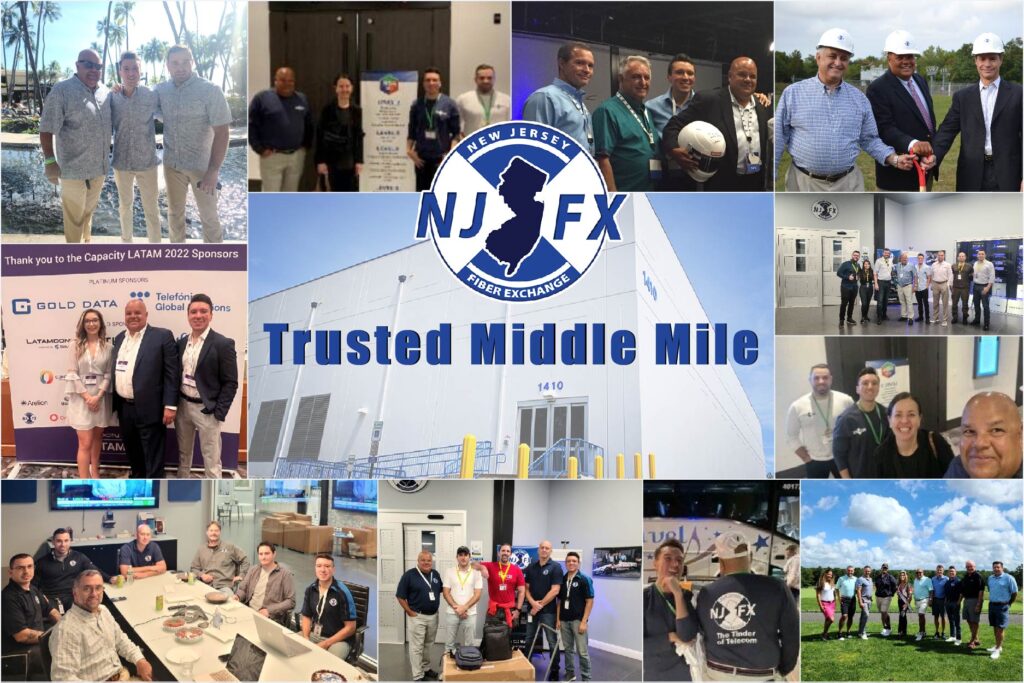 Wall Township, NJ –  The work-from-home movement has redefined where and how the Internet is used with video conferencing becoming a staple of the workday. When you combine that with cloud applications and the Internet of Things (IoT), we have become a more connected society with greater quantities of bits and bytes consuming greater amounts of broadband capacity. NJFX’s evolution since its founding in 2015 embodies “The Trusted Middle Mile” with its connections between subsea cables, U.S. terrestrial networks, Internet exchanges, global cloud, and content delivery network operators.  The Tier 3 purpose-built, subsea cable landing station now has 4 subsea cables operational and helping to connect over 30 independent network operators.

Today Multinational Banks, Global Cloud Operators, Tier1 Global ISP’s, US Carriers, and a variety of other networks use this NJFX Trusted Middle Mile infrastructure. AT&T just announced its addition of a network Point-of-Presence at NJFX, enhancing connectivity across the Atlantic Ocean and to Latin America.

Getting these independent network operators to install their Point of Presence using a variety of independent rights of ways takes years. Some come by land and others by sea, the ultimate network route diversity. Routes from Denmark, Norway, Ireland, the UK, Brazil, and the Caribbean use subsea access for their routes to NJFX. Zayo, ATT, Lumen, Lightpath, Crown Castle, UFD, Windstream, Aurelion, Epsilon, Zenfi, and Verizon designed their own independent unique terrestrial underground and aerial routes to insure resilience to our community of carriers.

Our NJFX facility has been designed and built with a resilience in mind security, physical safety, and redundant power supplies in mind. NJFX’s team is trained, coordinates with DHS/CISA for resources/information flow and supports customers 24x7x365 to troubleshoot network issues.

Today, NJFX’s role in supporting telecommunications has become more important than ever as more organizations – and consumers – connect with cloud-based applications, stream video and devote more activity online – all of which demand a purpose-built Middle Mile Infrastructure. Computing is increasingly happening in more remote portions of the world and depends upon the information to flow freely. Getting access to that data is all about the network, the middle mile which connects your home with the rest of the online world.

NJFX owns and operates a 64,800 square foot purpose-built Tier 3 Cable Landing Station (CLS) Colocation campus in Wall, NJ. This unique campus is the only carrier-neutral CLS colocation campus in the U.S supported by several route-independent carriers that offer direct access to multiple independent subsea cable systems interconnecting North America, Europe, South America, and the Caribbean. The facility offers direct access to TGN1, TGN2, and Seabras. The building is the subsea cable landing of HAVFRUE/AEC2 this year as well as the Confluence system in the near future. High and low-density colocation solutions are available with 24/7 support.