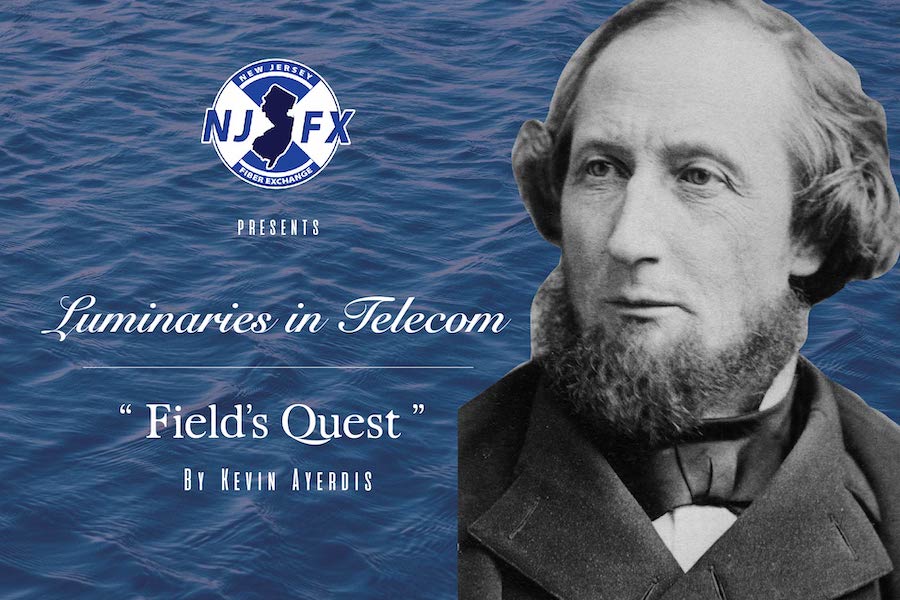 The year is 1850, and the dream of instantaneous communication is on the horizon, a cable stretching across the Atlantic. It’s been said this achievement is comparable to the landing of man on the moon. Leading the charge on this ineffable voyage is an ambitious young entrepreneur by the name of Cyrus West Field. Field’s quiet life as a semi-retired papermaker was upended upon meeting with an engineer by the name of Frederick Gisborne, who at first aimed to convince Field to help in establishing a telegraph connection between St. John’s, Newfoundland, and New York City. Field saw the potential of Gisborne’s initial mission and expanded upon it tenfold. Field spent over a decade traversing the Atlantic over 30 times, recruiting backers from both sides of the sea. Those investors in what became the Atlantic Telegraph Company supported what would later become one of the greatest engineering feats of the 19th century, The Transatlantic Cable. This project, however, was not without struggle.

After commissioning other like minds, (names that will likely be featured in time) among them the most notable, the originator of the telegraph himself Samuel Morse. Field cobbled together the “Cable Cabinet,” a burgeoning gathering of entrepreneurs, investors, and engineers. Through this newly formed faction, Field soon became key in the laying of Gibson’s initial conception, a 400-mile telegraph line connecting St. John’s, Newfoundland to Nova Scotia, integrating with telegraph lines from the U.S. After this initial undertaking was completed, Field set his sights on completing his masterwork, convincing the Cable Cabinet to extend the line from Newfoundland to Ireland. Field promised investors the cable would be completed by the end of 1857. Unfortunately for Field and Co. and company, this wasn’t a promise easily kept the foundations of laying the Transatlantic Cable proved to be troubled as repeated setbacks pushed the project back years. The initial plan was to load half of the cable onto each of two ships, Agamemnon, and USS Niagara, joining the two lengths of cable together at sea. The cable broke not but 24 hours late of leaving Ireland. There was not enough cable left to try again so the project was pushed back a year to allow for the planning and creation of a new line. Another attempt appeared successful as Queen Victoria successfully sent a telegram in 1858 of congratulations to President Buchanan through the newly installed line. It took about 18 hours for this “text” to be fully sent through the line and as fate would have it a few weeks later the signal gave out. It was found later that the electrical engineer of the team had miscalculated the proper voltage necessary which led to the structural meltdown. Additional attempts to connect Europe with the Americas had faced struggles with more broken lines which were spliced and broken time and time again…

Now years into the project, the American Civil War started, and throughout Field remained as determined as ever. He even played an important part in the war efforts as his activities brought him into contact with several prominent persons on both sides of the conflict. First being conceptualized in 1853, after trudging through a Civil War, financial and communication challenges, cumulatively five arduous and expensive attempts in all, the project ultimately reached completion in 1866. Field already had gained some notoriety, but the completion made him an international celebrity for “linking the world.” Field’s quest is thankfully a triumph for us all, if not for his resolve through all the years of trials and tribulations. Speculatively speaking, we may not have seen a similar cable laying project completed for years possibly decades following, especially considering the rippling impacts of the American Civil War. Field is unfortunately not as much a household name these days as Samuel Morse or Alexander Graham Bell, but he is still remembered throughout history having received a gold medal from the U.S. Congress and the grand prize at the International Exposition in Paris for his work on the transatlantic cable.

Of course, there is much more to the story, and we may return to the story of the First Transatlantic Cable in the future but for now, this concludes our first feature in the “Luminaries in Telecom” series. Any suggestions for a person in Telecom history you think deserves a feature send a message to Emily@njfx.net.