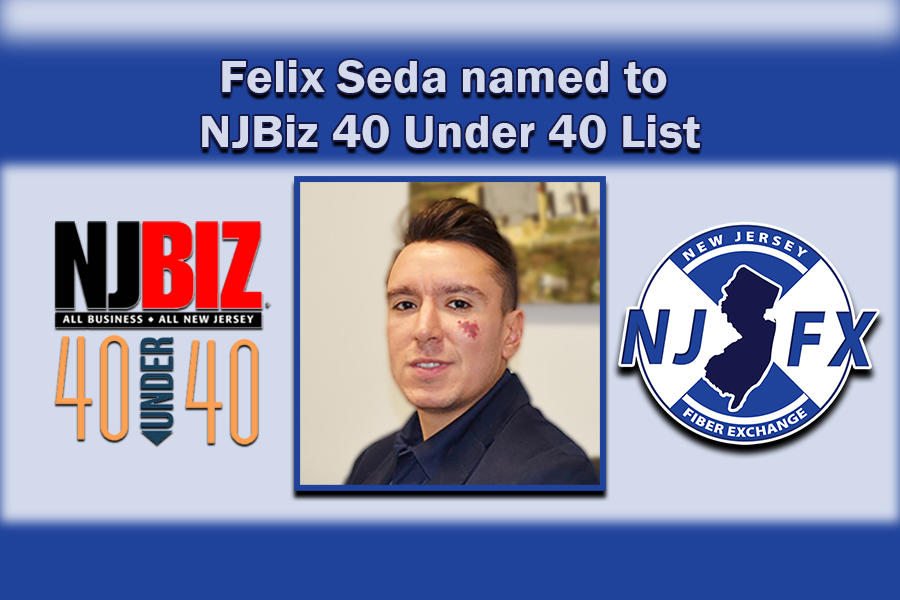 Recognized among New Jersey’s Young Movers and Shakers in Business

Felix Seda, the General Manager at NJFX, has been recognized by NJBiz as one of New Jersey’s “40 Under 40”. This program recognizes New Jersey business leaders, under the age of 40, who share a commitment to business growth, professional excellence and their community.

The annual 40 Under 40 Awards honor the movers and shakers making their mark in New Jersey business. These young, noteworthy business people represent a wide range of industries. They prove much can be accomplished before your 40th birthday with determination, passion and drive.

Felix came to NJFX by way of the financial field, holding a management position at Barclay’s Wealth. Now, after only five years as NJFX General Manager, he has played a key role in accomplishing NJFX’s unique mission: to create an avenue for carriers and networks to get as close to the edge as possible, bridging the gap between the subsea cable landing station and landline fiber routes. He has played a major role in the success of this mission, which has made New Jersey a major player in the tech and telecom industry, putting it on the map as a global hub of communications.

Felix’s impact on the industry as a whole is also demonstrated beyond his work with NJFX. He is dedicated to bringing young talent into the telecom industry by spearheading a number of millennial-focused initiatives to encourage the education and engagement of young professionals. He created the Millennial Reception at PTC 2020, aimed at bringing new telecom employees together to network and engage with select industry veterans to further their careers. He is also working closely with SubOptic, a global organization invested in the long-term success of the fiber optic subsea communications industry, on its Diversity and Inclusion initiative.

He sees the value of recruiting young professionals, many of which are digital natives, and the unique perspective they may bring to an industry that is often so dominated by veterans involved from the beginning of the modern internet. The hiring and involvement of these fresh, young professionals will do a great deal to propel the industry into the future. Felix was also recently named on the Capacity Media Power 100 List for his professional accomplishments.

NJBiz is New Jersey’s leading business journal. The “40 Under 40” awards will be presented virtually on October 28th. You can see the complete “40 Under 40” list here. To learn more about NJFX, visit www.njfx.net.